The global economy is experiencing a severe contraction as countries seek to contain the coronavirus. Even though the worst of this contraction has now passed, the outlook remains highly uncertain. The recovery is expected to be only gradual and its shape is dependent on containment of the virus. While infection rates have declined in some countries, they are still very high and rising in others.

International trade remains weak, although there has been a strong recovery in industrial activity in China over recent months.

Globally, conditions in financial markets remain acommodative. Volatility has declined and there have been large raises of both debt and equity. The prices of many assets have risen substantially despite the high level of uncertainty about the economic outlook. Bond yields remain at historically low levels.

There is a very high level of liquidity in the Australian financial system and borrowing rates are at historical lows.

As difficult as this is, the downturn is not as severe as earlier expected and a recovery is now underway in most of Australia. This recovery is, however, likely to be both uneven and bumpy, with the coronavirus outbreak in Victoria having a major effect on the Victorian economy.

Equity prices have increased, in part because market participants expect the decline in corporate profits to be short-lived.

As US reporting season heads into its final week the overall results are good relative to forecasts, but dramatically down on the previous quarter. Hilton Worldwide illustrated the real-world damage caused by lockdown with a loss that was close to double analysts’ estimates. However, most reports beat forecasts, including Ball Corp, American Electric, Bristol-Myer Squib and ABioMed.

There are two important data releases on trade and unemployment on the market horizon. China trade data released on 7 August is crucial to the “v-shaped recovery” narrative. 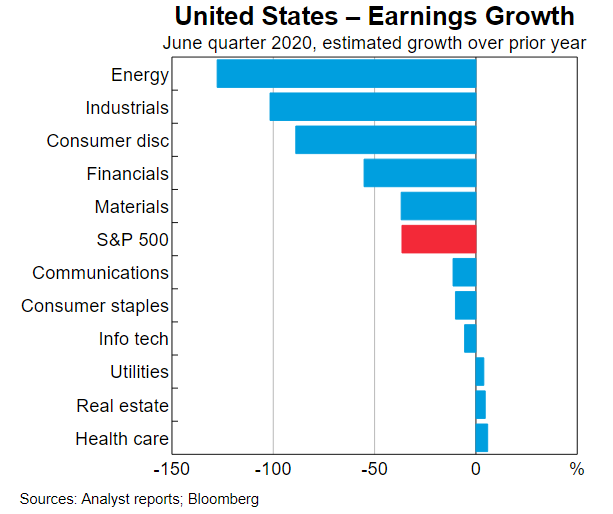 Sovereign debt issuance has increased sharply in recent months. Initially, governments concentrated most new borrowing in more liquid, short-dated instruments; for example, the US Treasury issued around $2.4 trillion in bills during the June quarter.

While funding conditions have eased, a sharp fall in corporate earnings is expected to see a rise in the number of companies that default on their debts. Many firms have had their credit ratings downgraded, although the pace of these downgrades has slowed since March. These defaults have so far been concentrated in a few industries that are most directly exposed to the pandemic and the associated downturn in economic activity, such as the energy, retail, leisure and entertainment sectors. Analysts expect default rates in aggregate to rise further but to remain below the levels of previous economic downturns in part due to significant fiscal spending, temporary debt relief and forbearance, and, in some countries, changes to bankruptcy laws.

Gold closed at its highest level ever of $US2018.51 per ounce on Tuesday (4 Aug) as investors expected more fiscal stimulus, and continued to gain Wednesday (5 Aug), hitting a peak of $US2,048 during European trade.

Investors flocked to safe havens because of worsening diplomatic row between U.S and China, and expectations of another US stimulus bill coming soon. A stimulus bill could add liquidity to markets and weigh on rates, which would further support the precious metal.

Other key industrial inputs copper, iron ore and crude oil edged lower. European stocks fell, but US indices managed gains on the back of a handful of tech stocks.

AFR – Gold soars beyond US$2000 amid Beiruit blast